Due to manifold archeological discoveries, we now know that there were many subspecies of Homo erectus that lived in what is now China during prehistoric times. Yuanmou Man is yet another such humanoid ancestor of ours just like Lantian Man and the much more famous Peking Man. The Yuanmou Man Site where the archeological evidence for Yuanmou Man's existence was unearthed is however located thousands of kilometers away from the other significant prehistoric excavation sites in China like the Xihoudu Site, Peking Man Site, Lantian Man Sites and Nihewan Ruins. It is located on the mountainside about 500 meters north of Danawu Village in Yuanmou County (Yunnan province).

The scientific proof that Yuanmou Man once inhabited this area during the paleolithic period of prehistory consists of two upper incisor teeth as well as a left shinbone shaft that Chinese archeologists respectively unearthed on the 1st of May 1965 and in December 1984. The two places of discovery are located only about 250 meters away from each other at an elevation of 1,050 to 1,150 meters. Scientific tests have revealed that the shinbone belonged to a young female whereas the two teeth belonged to a male. Paleomagnetic dating of the two teeth in 1976 has revealed them to be about 1.7 million years old. Retesting in 1977 has however corrected their age to somewhere between 1.63 and 1.64 million years. The Yuanmou Man fossils are therefore the oldest human fossils that were ever discovered in China. (The much older fossils that were discovered at the Xihoudu Site were animal fossils that prove human activity like scraping bones and making a fire but not human fossils.) casts of the two incisor teeth of Yuanmou Man, on display at the Shanghai Natural History MuseumThough ape-like in appearance, the subspecies of Homo erectus that has been classified as Yuanmou Man was able to walk upright and to make and use tools. Included among the 16 stone tools that were discovered at or near the Yuanmou Man Site were cores, flakes, choppers, pointed tools and scrapers. All these tools were made of quartz or quartzite that the Yuanmou people had probably gathered from a nearby river. Furthermore, a number of animal fossils were excavated at the Yuanmou Man Site as well. During the distant age when this area was inhabited by the Yuanmou people, the local vegetation featured grassland, bushland, marshland and forests. The animals that then lived alongside and were hunted by Yuanmou Man included stegodonts, deer, rhinos, cattle, pigs, chalicotheres and giant short-faced hyenas. The Yuanmou Man Museum contains six spacious exhibition halls on its two floors. It might be best to visit this museum early in the morning as soon as it has opened its doors for the day. That is because some visitors have reported that it can get very hot inside due to lack of ventilation and air conditioning. A thorough visit of the museum should take about 2 - 3 hours. After all, there are about 4,000 cultural relics and 1,200 models and specimens as well as 200 pictures and other items on display. Each of the six exhibition halls at the Yuanmou Man Museum has an overarching theme. These themes are reflected in the names of the halls, which are: "Human Origins Exhibition Hall", "Yuanmou Ancient Apes and Yuanmou People Exhibition Hall", "Scene Hall", "Yuanmou Paleolithic and Fine Stone Culture Exhibition Hall", "Dadunzi Neolithic Culture Exhibition Hall" and "Dinosaur Exhibition Hall".

Included among the exhibits that you can see at the Yuanmou Man Museum are replicas of the two fossilized teeth of Yuanmou Man, models that attempt to recreate the physical characteristics of the Yuanmou people, models of dinosaur fossils (including a very large one in Hall 6), fossils of ancient apes and rhinoceros that were discovered in the Yuanmou area and various tools that humans used during different eras of their evolutionary development. The display of the exhibits is accompanied by interesting information on the Yuanmou people, the ancient dinosaurs that once roamed this area, the evolutionary history of ancient humans and paleontology in general as well as the history of the Yuanmou territory. So, if you have ever wondered about the evolutionary links that science has so far uncovered between the different primitive humanoid species that existed during prehistoric times, then don't forget to visit the Yuanmou Man Museum when coming to Yuanmou County!

How to get to the Yuanmou Man Site & Museum?

On the following Google map, you can see the location of the Yuanmou Man Museum and the Yuanmou Man Site (the blue icons). The Yuanmou Hotel (the yellow hotel bed icon) is our recommended hotel nearby. Zoom out of the map to see the location of the Zhongwei Green Lake Hotel Kunming, our recommended hotel at Kunming's city center. Further below on this page, you can read a review of the services and amenities of both of these hotels. In case you are planning a trip to China, you could support this website by using the provided affiliate links to check prices and book your hotel accomodation!

The 4-star Yuanmou Hotel that is reviewed first in detail below is the best hotel in Yuanma Town. It is conveniently located just opposite the Yuanmou Man Museum. The Yuanmou Hotel is available for booking on Trip.com but not on Agoda. The Yuanmou Hotel is a comfortable 4-star hotel that was opened in 2017 near the center of Yuanma Town. It is located just opposite the Yuanmou Man Museum and about 1.6km away from the town center. The approximately 4-kilometer-trip by taxi from this hotel to the new Yuanmou West Railway Station typically takes less than 10 minutes. The hotel provides a taxi booking service which guests might consider using when planning their excursion to the Yuanmou Man Site. This original discovery site of the Yuanmou Man fossils can be reached from this hotel by taxi in about 30 minutes. Tourists that plan to travel to Yuanmou County by car will be interested to know that there is ample free parking outside the Yuanmou Hotel. Due to the considerable distance from the nearest airports, it is however important to note that the hotel does not provide any airport transfer services. That's probably not a big issue for most tourists though since it takes less than 2 hours to travel here from Kunming by express train.

With a total number of 199 rooms (including suites), the Yuanmou Hotel is not only the best but also the biggest hotel in Yuanmou County. The rooms are air-conditioned and free Wi-Fi is available. Non-smoking rooms are available upon request. There is a minibar in each room and the hotel also provides free bottled water. Buffet breakfast is included in most room rates but can also be purchased separately for 38 yuan per person. In addition to the on-site restaurant, there is also a coffee shop, teahouse and bar within the hotel's vast premises. For exercise and games, guests can play table tennis and billiards and also have access to a special game room for playing mahjong, chess or poker.

The Zhongwei Green Lake Hotel Kunming that is reviewed in detail below is located right next to the Green Lake Park and about 5.6km away from the Kunming Railway Station. The taxi ride from the hotel to the railway station should take about 25 minutes. In addition to the links to Agoda that are used in the review below, this 5-star hotel is also available for booking on Trip.com by following this link. 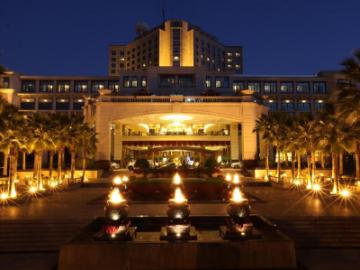 The Zhongwei Green Lake Hotel Kunming is a historic 5-star hotel that was already opened in 1956 at its prime location right next to the Green Lake Park and only about 1km away from the city center. Despite its age, the hotel that was most recently renovated in 2017 features the latest in modern amenities and technology. From its tranquil location near the Green Lake, guests are just a short walk away from many of Kunming's famous sights such as the Yuantong Temple, the Jingxing Bird and Flower Market and the Miaozhan Temple of Kunming's Shaolin Temple Complex. What's more, access of the neighborhoods around the Zhongwei Green Lake Hotel is facilitated by the availability of a free shuttle service. The hotel can arrange car rental for its guests and there is ample free parking available. The 163-kilometer-drive from the hotel to the Yuanmou Man Museum in Yuanma Town should take about 2 hours. Reaching the Kunming Changshui International Airport (27km away) from this hotel typically takes about 40 - 45 minutes and airport transfer is available upon request (for an additional fee).

The Zhongwei Green Lake Hotel Kunming has a total of 308 rooms (including 14 suites). Some rooms have a balcony or terrace. Smoking is only permitted in certain designated areas of the hotel. All rooms are air-conditioned and equipped with a refrigerator, minibar, safe, blackout curtains, a BOSE media system and a flat-screen TV with video streaming capabilities. Free bottled water is provided and buffet breakfast is generally included in the room rate (136 yuan if not included). Guests can access the internet for free through Wi-Fi and/or LAN cable in the rooms. Laundry service (including dry cleaning) and luggage storage are available. The hotel has a Chinese and a Western restaurant and there are also a coffee shop, teahouse and a bar on-site. To keep in shape, hotel guests have access to a swimming pool (indoor and outdoor), fitness center, yoga room as well as a tennis court and a squash court. After a busy day, guests can unwind at the hotel's spa and/or sauna. The on-site nightclub and karaoke rooms on the other hand are a great place to have fun and make new friends.

about 101 miles away from the Yuanmou Man Museum