The world-famous Peking Man Site that is inscribed on the UNESCO world heritage list is located about 42km southwest of Beijing at Zhoukoudian (right next to the Zhoukoudian Railway Station) in Fangshan County. A large number of the ancient relics that were discovered at the site are now on display at the Peking Man Museum right next to it. Peking Man (Homo erectus pekinensis) is the name that was given to the ancient hominids of the Homo erectus kind that are estimated to have lived at the Zhoukoudian site during prehistoric times as far back as about 700,000 years ago. However, not all scientists agree with this estimate and some of them believe that Peking Man lived at the site no earlier than 530,000 years ago. excavation at the Peking Man Site at Zhoukoudian ca. 1930It was the Swedish archeologist Johan Gunnar Andersson who discovered the Peking Man Site at the northern face of Dragon Bone Hill (Longgushan) in 1918. He returned a few years later with his assistant Otto Zdansky who led the excavation efforts that started tentatively in 1921 and 1923 at what is today called Apeman Cave or Locality 1. Originally, this cave measured 140 meters from east to west. Back then, it was simply known as Peking Man Site. Tourists are nowadays allowed to visit this cave since it has already been thoroughly excavated (13 layers up to a depth of about 40m). Most of the excavation work at the cave occurred between 1927 and 1937. It had to be halted then due to the outbreak of the Second Sino-Japanese War. Archeological work at the cave resumed after the end of the war in 1949 and yielded further fossils and artefacts.

Two teeth of a previously unknown type of hominid were the first significant findings from the excavations. Andersson announced their discovery to the world in 1926. Most spectacularly, a complete skull was discovered on the 2nd of December 1929. The later period of excavation yielded further complete and partial skulls and some mandible bones, many teeth, some skeletal bones and a plethora of ancient stone tools. It is estimated that these discovered hominid remains were from about 45 different individuals. Additionally, the Peking Man Site yielded the remains of Archaic Homo sapiens. entrance to one of the caves at the Peking Man SiteBesides Apeman Cave, there are a number of other caves at the Peking Man Site as well as fissures, pits and deposits. Most of these have been fully excavated during various periods as well but there are also some localities where archeological work is still ongoing today. Upper Cave, which was divided into an upper level living area and a lower level burial ground, is probably the second most important locality at the site. Tools and ornaments as well as skulls and other remains from at least eight different individuals were found there during excavation in 1933 and 1934. These were identified to belong to a type of human known as Archaic Homo sapiens that are estimated to have lived at this cave about 18,000 years ago. Complete skeletons of large mammals and other animal bones were also discovered at the Upper Cave. replica of the Peking Man Skull on display at the Peking Man MuseumAmong the other excavation sites at Zhoukoudian, Gezitang Cave and the New Cave Man Site have also garnered significant attention within the scientific community. At the Gezitang Cave, around 100 fossils of several species of ancient deer were found in September 2005. Much earlier excavations at the New Cave (a.k.a. Locality Four) in 1937/38 and in 1973 unearthed stoneware, one tooth and most importantly burned bones and seeds that were carbon-dated to be about 100,000 years old. These seemingly unspectacular fossils thereby provide proof of the earliest-known use of fire among humans. As a kind of silent testimony of the activity of early humans, they also helped modern science to bridge the gap between Peking Man and Upper Cave Man.

Sadly, most of the original fossils of Peking Man disappeared during the turmoils of war in 1941 and may never be rediscovered. The only original fossils that still remain are five teeth, one upper arm bone and one leg bone. The skulls and other bones that visitors can see at the attached Peking Man Museum right next to the Apeman Cave are therefore casts that had been taken of the originals before their disappearance.

The Peking Man Museum is housed in a modern three floor building that is open to the public since 2014. It is also known as the Zhoukoudian Site Museum or Zhoukoudian Anthropological Museum. In its exhibition halls, visitors can see more than 1600 relics. These are mainly the remaining original Peking Man fossils as well as the realistic replica casts of the fossils that were lost. The above mentioned fossils of Archaic Homo sapiens, stone tools, bone needles, decorative objects, animal fossils etc. are also on display. A 4D movie theater, highly interactive displays that use the latest technology and wax figure recreations of Peking Man in his habitat make a visit of the Peking Man Museum not only instructive and entertaining for adults but also for children. After having viewed the interactive exhibits and watched the films at the 4D movie theater, visitors will leave the museum with a much better understanding of Peking Man's primitive living conditions. Entrance to the Peking Man Site at Zhoukoudian

How to get to the Peking Man Site at Zhoukoudian?

On the following Google map, you can see the location of the Peking Man Museum (the blue icon) and the Beijing Huihao International Hotel (the yellow hotel bed icon) which is our recommended hotel nearby. Zoom out of the map to see the location of the Beijing Hotel NUO, our recommended hotel at Beijing's city center. Further below on this page, you can read a review of the services and amenities of both of these hotels. In case you are planning a trip to China, you could support this website by using the provided affiliate links to check prices and book your hotel accomodation!

The Beijing Huihao International Hotel that is reviewed below is the closest 4 or 5-star hotel to the Peking Man Museum at Zhoukoudian. In addition to the links to Agoda that are used in the review below, this 4-star hotel is also available for booking on Trip.com by following this link. 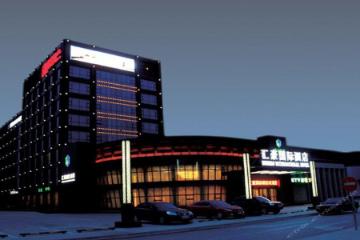 The Beijing Huihao International Hotel is a 4-star hotel that is located at the southwestern outskirts of Beijing, about 54km from the city center. Beijing Nanyuan Airport is the closest of the city's three airports and lies about 48.4km away from this hotel. The Beijing Huihao International Hotel is ideal for travellers that plan to use a rental car or taxi to get to the Peking Man Museum at Zhoukoudian which is only about 7.4 miles away (the hotel has a free car park). Besides the Peking Man Site, there are many other places of interest in the relative vicinity of this hotel such as the Western Zhou Yan State Capital Museum and the Buddhist Yunju Temple. Visitors that prefer to use public transportation such as busses or the Beijing Subway to get around would be better off staying at the 5-star luxury hotel at Beijing's city center that is listed below.

Most rooms of the Beijing Huihao International Hotel are air-conditioned and equipped with a LCD/plasma screen TV and a minibar. The rooms have a kitchenette and room service is available 24/7. Non-smoking rooms are available upon request. Free Wi-Fi is available in public areas of the hotel. Free breakfast is included in the room rate and luggage storage is provided. There is a restaurant and a bar on the premises of this hotel that cater to the culinary needs of the guests. To stay fit and relax, guests can use the hotel's fitness center, sauna, spa and even book a massage.

The Beijing Hotel NUO that is reviewed below is located at the city center of Beijing, close to the Forbidden City and other major sights of China's capital. In addition to the links to Agoda that are used in the review below, this 5-star hotel is also available for booking on Trip.com by following this link. The Beijing Hotel NUO is a 5-star hotel that occupies Block B (built in 1917) of the historic Beijing Hotel. With its classic architecture that attracts attention with its grand colonnade façade, broad marble staircase and interior features such as period-styled rooms and polished 1920s dance floor, this hotel attracts travellers from all over the world that want to experience its mixture of old-world charm and modern comforts (last hotel renovation was in 2006). When it comes to location-related advantages, there is no better place to stay in Beijing than at the Hotel NUO. It is located right at the heart of the city just a short walk away from Tiananmen Square and also within close walking distance of the famous Wangfujing Street (famous for shopping and eating). What's more, access to the neighborhoods around the hotel is greatly facilitated by the availability of a free shuttle service and the closest subway station (Wangfujing Station) is nearby as well. Of course, the hotel also arranges transportation to and from the airport (for an extra fee of 750 yuan) and guests can request to book that service in advance when making their room reservation online. Travel time between the hotel and the closest airport - Beijing Capital International Airport (PEK) - is typically about 50 minutes.