The information contained here are subject to change. Chinese History Digest is not responsible or liable if any changes should occur. If you can read Chinese, you could also check the official website of the Chengziya Site Museum for the latest information.

9am - 5pm
closed on Mondays

The Chengziya Ruins Museum is located near the city of Jinan in Shandong province. It encompasses the Chengziya Site which is primarily associated with the Longshan culture. This culture flourished during prehistoric times in China's eastern regions and its main site Chengziya was inhabited from about 2500 BC until about 1900 BC. For decades, Chengziya was the largest neolithic settlement that had ever been discovered in China. That only changed with the fairly recent discovery of the roughly 4-million-square-meter-large Shimao Site in a remote part of Shaanxi province. gourd-shaped eggshell pottery of the Longshan CultureThe Longshan culture is also known as Black Pottery culture since most of its polished pottery is an oily black in color. It is therefore very different from the red and painted pottery of the Yangshao culture that is for example exhibited at the Banpo Museum in Xi'an. Some of the most exquisite pieces of Longshan culture pottery have a shell that is as thin as paper and as hard as porcelain. These prehistoric masterpieces are also known as eggshell pottery.

It was the Chinese archeologist Wu Jinding (Chinese: 吴金鼎, 1901–1948) who made the first discovery of such polished black Longshan pottery by pure chance in the spring of 1928. Due to the close proximity of the discovery site to the Longshan Hill (the Chinese word Longshan means 'dragon hill') and village, the prehistoric culture whose ancient settlement was discovered in such a fortuitous way was ultimately named the Longshan culture. The former village has since developed into the Longshan residential district (Chinese: 龙山镇 Lóngshān Zhèn) which is located to the east of Shandong's provincial capital Jinan. historic photo from the excavation of the Chengziya Site in the 1930sThe archeological site by itself is however known as the Chengziya Site. Its first excavation occurred in 1930 which was then followed up by another excavation the following year. In fact, these excavations that employed modern methods were the first to be carried out by Chinese scholars alone, so without the help of the much more experienced foreign archeologists whose work in excavating other prehistoric sites in China such as the Peking Man Site had been of such paramount significance in years prior.

Additional excavations were carried out at the Chengziya Site in June 1989 and between the spring of 1990 and the summer of 1992. During this process of exploration, it was found that the Chengziya Site is actually comprised of three cities that are superimposed on top of each other. The neolithic Longshan culture site is the main site. It occupies the lowest of the three layers while the middle and upper layer ruins respectively date from the time of the Xia dynasty and Zhou dynasty. preserved part of the ancient Chengziya city wallThe neolithic settlement that was discovered in the western part of the Chengziya Site represents a kind of prototype of an early city. The settlement covered a rectangular area of about 200,000 square meters (about 400 by 500 meters) and was enclosed by a 7-meter-tall rammed earth wall on all of its sides. This wall was 10 meters wide at its base and about 5 meters wide at the top. A deep moat that was fed by water from a nearby river surrounded the four walls.

It is believed that the population of this early city numbered in the tens of thousands. All other settlements of the Longshan cuture that were discovered in the surrounding areas are much smaller. Furthermore, the quality of the pottery that was unearthed from the Chengziya settlement is generally much higher than what was found at those smaller settlements. These last two facts have led historians to conclude that Chengziya was a kind of regional capital that received tributes from the surrounding areas. building at the entrance of the Chengziya Ruins MuseumThe Chinese government placed the Chengziya Site under state protection in 1961. In order to preserve it as well as to make it accessible to the public, a museum was eventually built right on top of it. This Chengziya Ruins Museum opened its doors in September 1994. The entire museum complex that is shaped like a bird when seen from above covers an area of 20,000 square meters. In addition to the 4,000-square-meter main building at the front, the large complex houses exhibition halls at the wings and conference & event facilities as well as office space (which is occupied by the Jinan Longshan Culture Research Institute) in the middle and rear part. The entire area that is occupied by the Chengziya Site and the Chengziya Ruins Museum will eventually become the Chengziya National Archaeological Site Park. This transformation of the site that can be expected to substantially increase visitor numbers is scheduled to be completed in 2025.

The exhibition halls of the Chengziya Ruins Museum showcase many of the prehistoric relics that were discovered during the various excavations of the Chengziya Site. Unsurprisingly, the display of Longshan pottery occupies a large part of the museum's exhibition space. Both polished black and gray pottery of various sizes, shapes and functions can be seen such as cups, bowls, plates, basins, pots, urns and cooking utensils. Some of the displayed pottery features inscriptions and/or decorative patterns. The shiny black eggshell pottery however is regarded as the highest-quality pottery that this culture produced. After all, it not only required very intricate production techniques but also firing temperatures of about 1000 degrees Celsius! In addition to the famous Longshan pottery, visitors of the Chengziya Ruins Museum will also be able to see various bone utensils and stone tools that were unearthed at the site such as axes, shovels, sickles, knives and arrowheads.

The best way to reach the Chengziya Ruins Museum is by car or taxi from the nearby provincial capital Jinan which lies about 25km to the west of it. Tourists that decide to stay at the luxurious Grand Metropark Hotel Shandong in Jinan (you can find our review of the services and amenities of this hotel at the bottom of this page) should plan about 50 minutes to reach the museum and about 2 hours for a thorough visit of it. Before or afterwards, there are a few other noteworthy tourist sites in Jinan that merit a visit as well such as the Daming Lake Park, the Baotu Spring Park and the Shandong Provincial Museum. How to get to the Chengziya Ruins Museum?

On the following Google map, you can see the location of the Chengziya Ruins Museum (the blue icon) and the Grand Metropark Hotel Shandong (the yellow hotel bed icon) which is our recommended hotel nearby. Further below on this page, you can read a review of this hotel's services and amenities. In case you are planning a trip to China, you could support this website by using the provided affiliate links to check prices and book your hotel accomodation!

Recommended Hotel near the Chengziya Site

The Grand Metropark Hotel Shandong that is reviewed below is ideally located at the center of Jinan. The Chengziya Site and Chengziya Ruins Museum are however located to the east of Jinan but the 34-kilometer-drive to get there will normally take less than an hour. In addition to the links to Agoda that are used in the review below, this 4-star hotel is also available for booking on Trip.com by following this link. 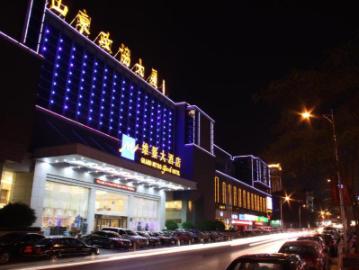 The Grand Metropark Hotel Shandong was opened in 2009 and renovated in 2012. It is a 4-star hotel that is located only about 1km away from the city center of Jinan. Access of the neighborhoods around the hotel is very convenient due to the availability of a shuttle service. What's more, the hotel's location is ideal for tourists since Jinan's most famous tourist sights are all nearby. In fact, the Daming Lake Park, Black Tiger Spring (a.k.a. Heihu Spring), Baotu Spring Park, Thousand-Buddha Mountain (Qianfo Shan) and the historic Furong Street can all be reached on foot within a short time. The Grand Metropark Hotel Shandong can book taxis and arrange car rentals and there is ample free parking space available outside the hotel. Transportation to and from the Jinan Yaoqiang International Airport can be booked for an additional fee of 160 yuan and the journey only takes about 45 minutes. Access to China's extensive railway transportation network is even more convenient as the Daminghu Railway Station (Daming Lake Railway Station) is only about 2km away from the hotel.

All rooms of the Grand Metropark Hotel Shandong are air-conditioned and equipped with a refrigerator, cable TV, minibar and safe. Free bottled water is provided and the internet can be accessed for free through LAN cable in the rooms and Wi-Fi in designated areas. Laundry service (including dry cleaning) and luggage storage are available as well. Smoking is however only allowed in certain designated areas of the hotel. There are altogether three restaurants as well as a coffee shop, teahouse and lobby bar on-site. Buffet breakfast (Chinese & Western food) is included in most room rates but can also be purchased separately for 60 yuan per person. For exercise, hotel guests have access to a heated indoor swimming pool, tennis court and a fitness center. Playing such games as table tennis, billiards, mahjong, chess and poker is also possible. For relaxation, hotel guests can book a massage and use the hotel's sauna, steamroom and spa.

20.9 miles away from the Chengziya Site