The Yue Fei Temple (a.k.a. Yuewang Temple) is located at the foot of the Qixia Hill near Hangzhou's famous West Lake. It is dedicated to Yue Fei, a military general of the Southern Song dynasty who is still held in high regard by the Chinese people today for his patriotism. It was under Yue Fei's military leadership in AD 1140 that the Southern Song army came close to regaining the northern territories that had been lost to non-Chinese invaders (the Jurchen people of the Jin dynasty) in AD 1127. Yue Fei was ultimately betrayed and executed though. Entrance of the Yue Fei Temple near Hangzhou's West LakeAs the Emperor Gaozong didn't reciprocate Yue Fei's loyalty, it took more than two decades for Yue Fei's honor to be restored posthumously. The succeeding Emperor Xiaozong not only dropped all charges against him but also granted him the posthumous name Wumu in AD 1169. A few decades and two emperors later, Yue Fei was granted the posthumous title "King of È" by Emperor Ningzong in AD 1211. The Yue Fei Temple was then built in AD 1221. symbolic eternal punishment of the traitors at the Yue Fei MausoleumIt includes the Yue Fei Mausoleum which is the area where you'll find the tombs of Yue Fei and his son Yue Yun. The tombs were demolished and rebuilt or renovated several times in their history. The current tombs that date from the time of the Qing dynasty last underwent significant repairs in 1979. Stone sculptures of horses, tigers and sheep from the time of the Ming dynasty decorate the open-air enclosure of the Yue Fei Mausoleum. Four fenced-in iron sculptures opposite the tombs represent the people who betrayed Yue Fei. These were the Song dynasty Chancellor Qin Hui, Qin's wife Wang Shi (Lady Wang), General Zhang Jun and the court official Moqi Xie. The four statues of these sinners symbolically endure their eternal penance by kneeling in pairs with their hands tied behind their backs.

The Shrine of Remembrance is the main hall of the Yue Fei Temple. In it, you will see a large statue of General Yue Fei. The Chinese inscription that signifies "Recover Our Lost Territories" on the tablet above the statue's head replicates Yue Fei's original handwriting and large images at the back of the hall tell the story of his life. The 373 crane images that are drawn on the floor of the main hall symbolize the values of faithfulness and integrity that Yue Fei exemplified in people's minds. How to get to the Yue Fei Temple near Hangzhou's West Lake?

On the following Google map, you can see the location of the Yue Fei Temple (the blue icon) and the Shangri-La Hotel Hangzhou (the yellow hotel bed icon) which is our recommended hotel nearby. Further below on this page, you can read a review of this hotel's services and amenities. In case you are planning a trip to China, you could support this website by using the provided affiliate links to check prices and book your hotel accomodation!

The Shangri-La Hotel Hangzhou that is reviewed below is the closest 5-star hotel to the Yue Fei Temple in Hangzhou. In addition to the links to Agoda that are used in the review below, this hotel is also available for booking on Trip.com by following this link. 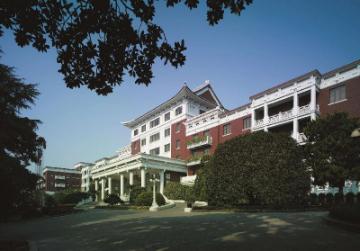 The Shangri-La Hotel Hangzhou is a luxurious 5-star hotel that is nestled amidst rolling hills and lush greenery within close walking distance of both Hangzhou's city center and West Lake. The views from this location are stunning in all directions and dominated by Solitary Hill Island and the graceful Xiling Bridge on one side and the landscape of Baoshi Mountain on the other side. The Yue Fei Temple is located right next to the Shangri-La Hotel Hangzhou and many other attractions like the Leifeng Pagoda (2.7 km) or the city's exciting night markets can be reached on foot from here.

However, it is not even necessary to walk everywhere since there is also a convenient shuttle service that provides easy access to the surrounding neighborhoods. Guests also have the option to rent bicycles at the Shangri-La Hotel Hangzhou (and then cycle around the West Lake perhaps?) or book a rental car (free parking is available). Reaching the Hangzhou Xiaoshan International Airport typically takes about 45 minutes and airport transfer can be requested along with the room reservation (for an additional fee of 600 yuan). The closest subway station is less than 3km away from the hotel and reaching the Hangzhou Railway Station takes about 15 minutes by car.

The rooms of the Shangri-La Hotel Hangzhou are air-conditioned and equipped with a flat-screen TV, minibar and safe. Free bottled water is provided in the rooms which all have a private balcony and free Wi-Fi access. Smoking is however not permitted in any of the rooms but only in certain designated areas. Guests can request interconnected rooms but there are also family rooms and suites available. There are many options for guests to choose their preferred type of breakfast (American, Asian, Continental, Halal, Italian, Vegetarian, Buffet) which is generally included in the room rate (180 yuan if not included). Laundry service (including dry cleaning) and luggage storage are available. There are altogether three restaurants (and a bar and coffee shop) on-site that serve authentic cuisine including Cantonese as well as Italian dishes. For exercise, guests have access to tennis courts, an indoor swimming pool, a fitness center and a yoga room. For relaxation, hotel guests can book a relaxing massage and use the hotel's sauna and steamroom.