The information contained here are subject to change. Chinese History Digest is not responsible or liable if any changes should occur. If you can read Chinese, you can also check the official website of the Yin Ruins Museum for the latest information. There also exists an older English website for the Yin Ruins Museum that unfortunately hasn't been updated for some time.

The Yin Ruins Museum is made up of multiple buildings that stand in a park-like setting about 2km northwest of the city of Anyang (Henan province). The park marks the location of Yin Xu, the ancient capital of the Shang dynasty. Even though the museum just opened at this UNESCO World Heritage Site in September 2005, its buildings have been given the appearance of ancient structures. That makes them blend in tastefully with the surrounding park landscape and provides an appropriate setting for the cultural relics it displays. These were all unearthed through archeological digs at the site itself as far back as the 1920s. Exploration is still ongoing and new archeological treasures are periodically discovered. excavated chariot pits on display at the Yin Ruins Museum near AnyangThe buried remnants of Yin Xu constitute the biggest archaeological site in all of China. Yin Xu once covered a grand area of 24 square kilometers and was divided into four districts. All the palaces stood in one district and all the civil residences in another. The workshops were located in the third district and the tombs in the fourth. So far, excavations have uncovered more than 80 rammed-earth foundations of palaces, shrines, tombs and workshops. Many of the cultural relics that were unearthed during these digs such as bronzes, carved jade objects, pottery, lacquer ware and oracle bones (more on these below) are now on display at the exhibition hall of the museum. One of Yin Xu's excavated tombs that can be visited, the Tomb of Fu Hao, is the only tomb of a member of the royal family of the Shang dynasty that wasn't looted and has been uncovered intact. Fu Hao was the wife of one emperor of the Shang dynasty and possibly China's first female military general. The six chariot pits that were discovered at the Yin Xu site are also special as the earliest-known examples of animal-driven carts in China. The remains of a carriage and two horses that were found in each pit are now on display at one of the exhibition halls of the Yin Ruins Museum.

A four-legged bronze cauldron that was discovered at the site in 1939 is perhaps the single most famous relic that was unearthed from the Yin Ruins. It was at first known as the Simuwu ding but is now known as the Houmuwu ding. The massive ding is now on display at the National Museum of China in Beijing but you can see a replica of it at the Yin Ruins Museum. The vessel measures 133cm in height and 875kg in weight which makes it the world's biggest bronze relic ever uncovered. Tortoise plastron with divination inscription (Shang Dynasty, reign of King Wu Ding), National Museum of China, BeijingMost people that have heard of Yin Xu across the world however associate the site with the discovery of the oracle bones, tortoise shells and animal bones with mysterious ancient inscriptions on them. It is believed that farmers in the area that is now Anyang had periodically discovered such bones as far back as the Han dynasty. Possibly regarding them as bad omens, the bones were generally reburied. A large number of such bones was discovered once again in 1880 and the superstitious locals believed them to be "dragon bones" with magical powers. Soon, pharmacies all over China sold such bones as part of a Chinese medicine to treat malaria and other ailments.

In 1899, the scholar Wang Yirong that was prescribed this medicine recognized the bones for what they were, the earliest known example for Chinese writing. Even though the scholar Luo Zhenyu eventually discovered the source of the bones in Xiaotun village north of Anyang, it took until 1928 for the first official archaeological excavations to begin at the site. More than 150,000 bones and bone fragments with inscriptions on them have since been unearthed from pits amidst the buried ruins of the ancient Shang dynasty capital Yin Xu. enlarged copy of the bronze Houmuwu ding on display outside the Yin Ruins Museum near AnyangMuch research has been done in the years since to understand the purpose of the bones and the meaning of the inscribed characters on them. We now know that the ancient rulers of the Shang dynasty capital Yin Xu used the bones for the purpose of divination. After poking the bones with heated metal rods, the resulting cracks were interpreted as god's foretelling of the future. That's why the bones are now referred to as oracle bones. In addition to the date of the divination and name of the diviner, three different text messages were inscribed on the bones. The first one was the question that was being asked in the divination ritual. Second came the prognostication, so whatever the diviner predicted to happen based on the cracks in the bone. Interestingly, researchers today still have no idea whether any rules existed regarding the interpretation of the cracks. Whether or not the predicted divination result came true was inscribed at a later time as the third and final message on the bone. Even though the meaning of more than 2000 different characters of the oracle bone script is now understood, translating the messages on the ancient bones is still a challenging and sometimes even impossible task.

History buffs that are interested to learn even more about the oracle bones after their visit of the Yin Ruins Museum are advised to also visit the Anyang Museum as well as the National Museum of Chinese Writing during their time in Anyang. Going on an excursion to the nearby Linzhou region from Anyang is also highly recommended. There you can marvel at the outstanding achievement of the Chinese workers that built the Red Flag Canal during the Great Leap Forward era of the People's Republic of China in the 1960s. How to get to the Yin Ruins Museum near Anyang?

On the following Google map, you can see the location of the Yin Ruins Museum (the blue icon) and the Wanda Realm Anyang (the yellow hotel bed icon) which is our recommended hotel nearby. Further below on this page, you can read a review of this hotel's services and amenities. In case you are planning a trip to China, you could support this website by using the provided affiliate links to check prices and book your hotel accomodation!

The Wanda Realm Anyang that is reviewed below is the only 5-star hotel that exists in the small city of Anyang. In addition to the links to Agoda that are used in the review below, this 5-star hotel is also available for booking on Trip.com by following this link. 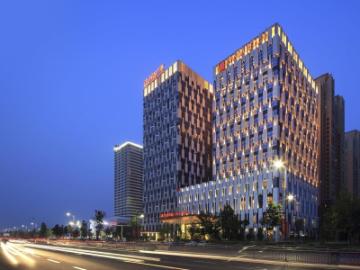 The Wanda Realm Anyang is the only 5-star hotel in the small city of Anyang. It is located to the south of the city center there, only 290 meters away from the Anyang Museum which is another must-see when visiting that city. At an approximate distance of 2.7km, the National Museum of Chinese Writing is also relatively close to this hotel. Another recommended sight that tourists could reach by taxi within a short time from this hotel are the Youli Castle Ruins. Taking a taxi is also the best way to get to the Yin Xu site and Yin Ruins Museum. Tourists that decide to rent a car in Anyang should also plan a day trip to the Linzhou area and visit the Red Flag Canal Scenic Area there. Ample free parking is available outside the Wanda Realm Anyang.

All rooms of the Wanda Realm Anyang are air-conditioned and equipped with a flatscreen TV, refrigerator and minibar. It is important to note that smoking is not permitted in the rooms and public areas of this hotel. The rooms have blackout curtains and free bottled water is provided for the guests. Free Wi-Fi is available in all rooms as well as at the public areas of the hotel. Free buffet breakfast is generally included in the room rate (104 yuan if not included). Laundry service (incl. dry cleaning) and luggage storage are available. The hotel has a restaurant and a bar that cater to the culinary needs of its guests. For exercise, guests have access to a swimming pool (indoor and outdoor) and a fitness center.