The information contained here are subject to change. Chinese History Digest is not responsible or liable if any changes should occur. You can also check the official website of the Shenyang Palace Museum for the latest information.

The Shenyang Imperial Palace and Beijing's Forbidden City are the only imperial palaces in China. The first three emperors of the Qing dynasty lived at the imperial palace in Shenyang from AD 1625 to 1644. Shenyang was the early Qing capital but it was then still named Mukden. The palace is therefore also known as Mukden Palace. It was modeled after the Forbidden City, yet it is much smaller (about 1/12th the size of the Forbidden City). Its architecture also incorporates some Tibetan, Mongolian and Manchu style elements. Dazheng Hall at the eastern section of the Shenyang Imperial PalaceAltogether, the Shenyang Imperial Palace is comprised of around twenty courtyards. These are dispersed in three distinct sections that were built during different periods: the eastern section, middle section and western section. There are about 300 rooms in total that served various functions. Visitors will find priceless artworks and cultural relics displayed there such as paintings, calligraphy, pottery, sculptures and lacquerware.

After the fall of the Ming dynasty in AD 1644, the Qing rulers moved their official residence to Beijing. The palace in Shenyang wasn't abandoned then however. It was maintained as a regional palace under the name Fengtian Xinggong (the imperial palace for short stays away from the capital). More than a century later in AD 1780, the Qianlong Emperor had the palace expanded by adding the western section to it. Successive Qing rulers usually stayed there for some time each year.

In 1955, the Shenyang Imperial Palace was converted into the Shenyang Palace Museum. The former palace and now museum is conveniently located right in the heart of the city. In 2004, it was added to the UNESCO World Heritage list. It is the most popular tourist attraction in Shenyang (Liaoning province) and an absolute must-see for all visitors that are interested in Chinese culture and history. Chongzheng Hall inside the Shenyang Imperial PalaceThe eastern section of the Shenyang Imperial Palace is the oldest of the three sections. It was built in AD 1625 during the reign of Nurhaci. The emperor performed his imperial duties from the Hall of Great Affairs (Dazheng Hall). The other ten pavilions in this section were allocated to the Eight Banners, which were the divisions into which the Manchu army (and society in general) was organized.

The middle section of the Shenyang Imperial Palace was completed in AD 1636 during the reign of Nurhaci's son Abahai. Its main buildings are the Daqing Gate, Chongzheng Hall, Phoenix Tower and Qingning Palace which are all in straight alignment from south to north. Abahai held court at Chongzheng Hall and lived with his concubines at Qingning Palace. The three-story Phoenix Tower in between the two palace halls was actually the tallest structure in the entire city at that time.

The western section was added to the Shenyang Imperial Palace during the reign of the Qianlong Emperor. The main buidings of this section are a theater hall and stage, Jiayin Hall and the Wensu Pavilion. The latter served as a kind of library and contained one of seven copies of the Complete Collection of Four Treasures, the largest collection of books in Chinese history. Compiling such a vast collection of books had taken more than a decade from AD 1772 on. Only four of the original seven copies of this historic encyclopedia survived, some partially damaged. The surviving copies are now safely kept at the National Library of China in Beijing, the National Palace Museum in Taipei, the Gansu Library in Lanzhou and the Zhejiang Library in Hangzhou.

How to get to the Shenyang Imperial Palace?

On the following Google map, you can see the location of the Shenyang Imperial Palace (the blue icon) and the Shangri-La Hotel Shenyang (the yellow hotel bed icon) which is our recommended hotel nearby. Further below on this page, you can read a review of this hotel's services and amenities. In case you are planning a trip to China, you could support this website by using the provided affiliate links to check prices and book your hotel accomodation!

The Shangri-La Hotel Shenyang that is reviewed below is one of the closest 5-star hotels to the Shenyang Palace Museum. In addition to the links to Agoda that are used in the review below, this 5-star hotel is also available for booking on Trip.com by following this link. 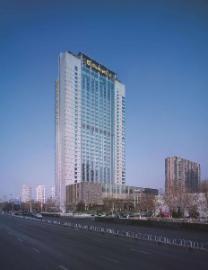 The Shangri-La Hotel Shenyang is a 5-star hotel that was opened in 2013 in the central business district of the city, about 2.7km away from the Shenyang Imperial Palace and 3.2km from the city center. The hotel's location in the middle of the city makes it convenient to reach many different places of interest in Shenyang such as MIXC Shopping Mall and the Liaoning Broadcast and Television Tower (both just a short walk away), the Shenyang Railway Station (about 5km away) and Shenyang North Railway Station (4.6km away). At the same time, the Shangri-La Hotel Shenyang is an oasis of tranquility amidst a bustling city since it is located right next to Qingnian Park which many of its rooms overlook. Hotel guests enjoy easy access to the neighborhoods around the hotel through a shuttle service and there is also a metro station just 600 meters walking distance from the hotel, giving easy access to the city's vast public transportation network. Reaching the Shenyang Taoxian International Airport by taxi typically takes about 40 minutes and airport transfer is available (for an extra fee).

All rooms of the Shangri-La Hotel Shenyang are air-conditioned and equipped with a flatscreen TV, safe and minibar. Free Wi-Fi is available in all rooms and breakfast is generally included in the room rate (149 yuan if not included). Smoking is only permitted in certain designated smoking areas. Laundry service (including dry cleaning) and luggage storage are available. The hotel's three restaurants (plus a bar and a coffee shop) not only serve the best in Chinese cuisine but a selection of authentic Western and Japanese cuisine as well. For exercise, guests have access to tennis courts, an indoor swimming pool and a fitness center. For relaxation, hotel guests can book a massage and use the hotel's sauna, steamroom and spa.