The information contained here are subject to change. Chinese History Digest is not responsible or liable if any changes should occur. You can also check the official website of the Shaolin Temple for the latest information.

The Shaolin Temple (a.k.a. Shaolin Monastery) is a Buddhist temple where Chinese Chan Buddhism (better known as Zen Buddhism in the West) is practiced. It is located in a forested area at the foot of the Songshan Mountain close to the city of Dengfeng (Henan province). Since 2010, the temple is inscribed on the UNESCO World Heritage List along with a number of other historic monuments in and around Dengfeng. In addition to its religious purpose, people throughout the world know the Shaolin Temple as the birthplace of the Chinese martial art of Kung Fu. The monks at the temple still practice Kung Fu every day and have even performed in martial arts shows and competitions. Being able to see such stunning Kung Fu demonstrations live is perhaps the main reason why up to 40,000 tourists visit the temple each day. Breathtaking Kung Fu shows are performed daily at the Shaolin Temple Wushu Training Center which stands near the temple complex. Kung Fu lovers that want to practice their hand at some of the shown skills themselves will find plenty of martial arts schools in Dengfeng (for example the Shaolin Tagou Martial Arts School) that offer lessons. view of Shanmen Hall at the entrance of the main temple complex of the Shaolin TempleVisitors that want to avoid the crowds and enjoy the temple's sights and sounds in peace should arrive outside holiday periods and preferably as soon as the temple opens in the morning. The large site of the Shaolin Monastery consists of the main temple and a number of auxiliary sights in its vicinity. Most tourists will probably start their visit with the main temple complex. It is also known as the Changzhu Temple and the first of its famous sights is the Shanmen Hall ("Mountain Gate Hall") that stands at the entrance. The golden Chinese characters 少林寺 (shao lin si = Shaolin Temple) that you will see on a tablet above the entrance were written by the Kangxi Emperor of the Qing dynasty in the year 1704!

Behind the Shanmen Hall you will find six additional main halls lined up on a straight axis. Among them, the Hall of Heavenly Kings and the Mahavira Hall are the most important. The Hall of Heavenly Kings (a.k.a. Devaraja Hall) with its four guardian gods stands right behind the Mountain Gate Hall. In fact, it was the original Mountain Gate until 1735 (the Shanmen Hall was built that year during a renovation of the temple)! The Mahavira Hall then follows as the third main hall of the complex. It is the principal hall where Buddhist activities are conducted in the temple. There are four more large halls behind the Mahavira Hall as well as several buildings along the sides of the main axis of the temple. Altogether, the rectangular surface area of the main temple complex measures only 57,600 square meters (160 x 360 meters) so it is only about a fourth of the size of the Confucius Temple in Qufu. Gate near the entrance of the Shaolin Temple areaHowever, the stellar importance of the Shaolin Monastery is much better demonstrated through its history. It was established all the way back in AD 495 at the behest of the Xiaowen Emperor of the Northern Wei dynasty in order to accomodate the Indian master Batuo (Buddhabhadra) who became the Shaolin Monastery's first abbot. Batuo dedicated his life to the translation of Buddhist scriptures and the preaching of Buddhist doctrines. The martial arts involvement of the Shaolin Monastery was kicked off with the arrival of Bodhidharma in AD 527. Besides being the first to preach the doctrines of Chan Buddhism at the temple, he is believed to have introduced a martial arts training program for the monks. It didn't take long for the newly acquired fighting skills of the Shaolin monks to get noticed. Already at the beginning of the seventh century, a group of 13 Shaolin monks found fame by fighting heroically to save the life of the later Tang dynasty Emperor Li Shimin.

At the heyday of the Shaolin Temple during the Ming dynasty, it housed more than 3000 monks. However, the history of the Shaolin Temple is not without its darker periods. It was destroyed multiple times during its history, most recently in 1928. About 90 percent of the temple was destroyed by a fire that burned for more than 40 days back then. What was left of the temple then faded into obscurity for several decades. Renewed interest in the temple was elicited by the amazing success of the 1982 movie "The Shaolin Temple". The financial donations of martial arts groups from all over the world subsequently contributed significantly to the gradual rebuilding of the temple. partial view of the Pagoda Forest right next to the main Shaolin Temple complexThere are a number of sights in the vicinity of the main temple of the Shaolin Monastery that should not be missed. The perhaps most important of them is the Ancestor's Monastery that lies about 1.3km away. It is also known as the First Patriarch Temple and stands on a small earth hill to the northwest. It was built during the Song dynasty to commemorate the founder of Chan Buddhism Bodhidharma. Art lovers shouldn't miss this small temple at any cost as it contains priceless cultural relics such as amazing sculptures and murals (especially at this temple's Main Hall). On top of a peak to the south of the Ancestor's Monastery stands the Second Ancestor's Monastery (a.k.a. Second Patriarch Temple). It commemorates the second patriarch of Chan Buddhism Dazu Huike who cut off his left arm in order to prove the sincerity of his desire to learn from Bodhidharma. Not averse to extreme measures himself, Bodhidharma meditated in front of a wall inside a cave for nine years straight. This cave that is now named Bodhidharma Cave or just Dharma Cave is located on top of a peak to the northwest of the main temple as well.

About 300 meters to the west of the main complex of the Shaolin Temple lies another world-famous sight, the Pagoda Forest. This largest pagoda forest in all of China is made up of more than 240 pagodas of various sizes (from one to seven stories) and from various historical periods. The oldest pagodas are from the time of the Tang dynasty and the most recent ones were built during the Qing dynasty. They all serve as tomb pagodas for the temple's Buddhist dignitaries of the past. Carvings and calligraphic inscriptions on the stone and brick pagodas provide valuable insights into the history of Buddhism in China. Further noteworthy sights throughout the Shaolin Temple complex include the temple's Ancestral Hall (30 meters west of the main temple complex), Guanghui Temple, Chuzu Temple, South Garden, the Sweet Dew Terrace and the Buddhist Living Quarters for transient monks. How to get to the Shaolin Temple near Dengfeng?

On the following Google map, you can see the location of the Shaolin Temple (the blue icon) and the Dengfeng Chanwu Hotel (the yellow hotel bed icon) which is our recommended hotel nearby. Further below on this page, you can read a review of this hotel's services and amenities. In case you are planning a trip to China, you could support this website by using the provided affiliate links to check prices and book your hotel accomodation!

The Dengfeng Chanwu Hotel that is reviewed below is located quite close to Dengfeng's city center and about a 15-minute-drive away from the Shaolin Monastery. In addition to the links to Agoda that are used in the review below, this 4-star hotel is also available for booking on Trip.com by following this link. There are no 5-star hotels in the small city of Dengfeng. 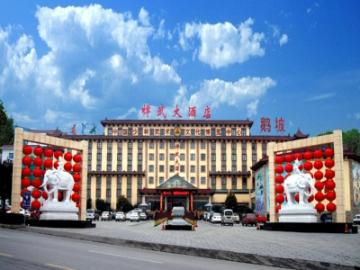 The Dengfeng Chanwu Hotel is a 4-star hotel that was opened in 2008 about 3km north of the city center. Driving the roughly 11km to the Shaolin Temple from here normally takes about 15 minutes. Other tourist sights that are just a short drive away from this hotel include the Taishi Towers, Songyang Academy of Classical Learning and the Dengfeng History Museum. Whereas reaching the Shaolin Temple is fairly convenient by public bus, other sights in the Dengfeng area are not so easily reached by public transportation. Therefore, it might be a good idea to visit the temple area on one day (and get there by bus) and visit Dengfeng's other sights by rental car or taxi the other day. In any case, free parking is available at the Dengfeng Chanwu Hotel. The hotel can also arrange airport transfer to and from the Luoyang Beijiao Airport (64.9km away) and Zhengzhou Xinzheng International Airport (76.2km away) for an extra fee.

All 218 rooms of the Dengfeng Chanwu Hotel are air-conditioned and equipped with an in-room safe and a minibar. Internet access in the rooms is provided through free Wi-Fi and/or free LAN internet. Smoking is only allowed in certain designated areas of the hotel. Laundry service and dry cleaning are available. The hotel has a restaurant and a bar on its premises. Guests can exercise at the hotel's fitness center and relax while playing billiards or enjoying a massage.