9am - 5pm
Tickets only available until 4pm
closed on Mondays The museum is located inside the two-story Shikumen building (built in 1920) where thirteen Chinese party delegates and two foreign Comintern representatives (the Dutch communist Henk Sneevliet and Vladimir Nikolsky from the Soviet Union) assembled to hold the First National Congress of the Communist Party of China on the 23rd of July 1921. Just a few weeks earlier on July 1st, China's Communist Party had been founded in the French concession of Shanghai by Chen Duxiu and Li Dazhao. wax figures of Mao Zedong (standing center figure) and the other CPC delegates at the site of the party's First National CongressOnly two of the assembled thirteen Chinese delegates - Mao Zedong and Dong Biwu - would be present 27 years later at the founding of the People's Republic of China. The 1st National Congress of the Communist Party of China continued in Shanghai until July 30th. Due to police harassment, its conclusion had to be moved then and took place on the 2nd of August 1921 on a rented tourist boat on Jiaxing's South Lake. You can read more about the events that preceded and succeeded the CPC's founding in the Republic of China section of this website.

The founding congress of the CPC took place in the living room that is situated on the first floor of the building. Everything is preserved there as it was back then. A long rectangular table covered with tea cups occupies the middle of the small room. Wooden stools surround the table and a tea table stands next to one of the side walls.

The upper floor of the building serves as a large exhibition hall. On a floor space of about 450 square meters you will find hundreds of exhibits relating to this historic period, from revolutionary relics to historic documents and photographs. The exhibits serve to illustrate the important events in the early history of the Communist Party of China.

The second floor also includes a wax figure hall that gives you the impression to travel back in time to witness this historic event first hand. It shows the thirteen Chinese delegates and two foreign observers huddled around a table. Mao Zedong who later founded the People's Republic of China in 1949 stands in the center to give a speech that is attentively listened to by the other attendees of the congress. How to get to the site of the CPC's First National Congress in Shanghai?

On the following Google map, you can see the location of the CPC's First National Congress site (the blue icon) and the Ruijin Hotel Taiyuan Villa (the yellow hotel bed icon) which is our recommended hotel nearby. Further below on this page, you can read a review of this hotel's services and amenities. In case you are planning a trip to China, you could support this website by using the provided affiliate links to check prices and book your hotel accomodation!

Recommended Hotel near Shanghai's site of the 1st National Congress:

The Ruijin Hotel Taiyuan Villa that is reviewed below is one of the closest 5-star hotels to the site of the First National Congress of the Communist Party of China in Shanghai. In addition to the links to Agoda that are used in the review below, this 5-star hotel is also available for booking on Trip.com by following this link. 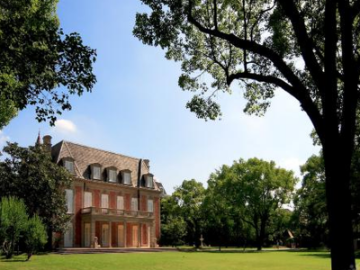 The Ruijin Hotel Taiyuan Villa is a 5-star hotel that is located in a tranquil area of downtown Shanghai relatively close to the site of the CPC's 1st National Congress. The main building of the hotel is a heritage villa that was built in 1928 in the style of the late French Renaissance. In 2008, the property was opened as a hotel. What makes this luxury hotel such a relaxing place in the middle of the hustle and bustle of Shanghai is that a large part of its 12,650-square-meter surface area is occupied by a green and parklike garden. The hotel's great downtown location within walking distance of many places of interest is another benefit of making the Ruijin Hotel Taiyuan Villa your home away from home. Shanghai's Former French Concession area is just 1.5km away and the Jing'an Temple, Yu Garden, Nanjing Lu Shopping Street and the Shanghai Museum are quite close by as well. However, it is not even necessary to walk everywhere since there is a shuttle service that provides easy access to the neighborhoods around the hotel. Furthermore, the closest subway station (South Shaanxi Road Station) lies just a 7-minute walk away. Airport transfer can be arranged through the hotel (for an extra fee) and typical travel times to the Shanghai Hongqiao and Pudong International Airports respectively are 35 and 50 minutes.

The Ruijin Hotel Taiyuan Villa has 23 guestrooms and 16 hotel-style apartments. Both types of accomodation are air-conditioned and equipped with a refrigerator, minibar, safe and satellite/cable TV. Free Wi-Fi is provided but smoking is not permitted in any of the rooms or indoor areas. Laundry service (including dry cleaning) and luggage storage are available. The hotel provides free buffet breakfast and has a restaurant, bar and coffee shop on its premises. For exercise, guests have access to an indoor swimming pool, a fitness center and courts for playing squash. For relaxation, the Ruijin Hotel Taiyuan Villa has a sauna and spa.