The information contained here are subject to change. Chinese History Digest is not responsible or liable if any changes should occur. You could also check the official website of the Yuanmingyuan Park for the latest information. Whereas most buildings that once stood throughout the Old Summer Palace were destroyed during tumultuous times in history (more on that later in this article), the gardens still exist today though their appearance has certainly changed over the centuries. The three gardens are the Garden of Eternal Spring (Changchunyuan), the Garden of Blossoming Spring (Qichunyuan) and the Garden of Perfect Splendor (Yuanmingyuan). Together, they cover an area of about 350 hectares. Yuanmingyuan is also the name under which the entire complex is known to Chinese people today, even though that is technically only one of the three gardens. drawing of the Haiyantang Palace with its Grand Waterworks fountainThe history of the Old Summer Palace began with the initial construction of the gardens in AD 1707. Their gradual expansion continued for 150 years. The Qianlong Emperor initiated the construction of European-style palaces in AD 1747 in a small area in the back of the Garden of Eternal Spring. In front of the largest palace, the Haiyantang, stood the famous Grand Waterworks. Its twelve bronze zodiac animal heads once spouted water in turn as a part of an elaborate clock fountain. There was also a labyrinth maze garden just like it was fashionable in European palace gardens like Versailles at that period in time. It is however a misconception that all the palaces that once stood on the grounds of the Old Summer Palace were Western in style. In fact, more than 95 percent of the buildings were Chinese in style and there were even a few buildings that were Tibetan and Mongolian in style. virtual reality recreation of palatial halls that once stood on the grounds of the Old Summer PalaceIn their heyday, the Chinese imperial gardens of the Old Summer Palace were praised as the "Garden of Gardens" and Europeans also called it the "Versailles of the East". Representing the pinnacle in architectural design and horticultural landscaping, the Old Summer Palace was an imperial summer resort that once far-exceeded the splendor of the nearby new Summer Palace (Yiheyuan) on every level. Hundreds of structures such as palatial halls, pavilions, temples, galleries and bridges once stood on the grounds and distinct scenic spots in the gardens recreated famous landscapes of southern China with exotic plants from all over the country. For that purpose, artificial lakes, streams and ponds were created on a massive scale so that 40 percent of the garden was then covered by rivers and lakes.

The halls served as a kind of imperial museum, storing and displaying cultural artifacts, antiquities and the finest Chinese artwork ever assembled. One of the halls that unfortunately no longer stands, the Wenyuan Hall (Hall of Literary Profundity), was one of the four most famous imperial libraries and stored an immense collection of precious ancient books, including works of literature and compilations such as the Complete Collection of Four Treasures. view of the ruins of the Grand Waterworks (Dashuifa) on the grounds of the Old Summer PalaceIn October of AD 1860, nearly all the splendor of the Old Summer Palace was reduced to rubble and ashes as a punitive act by the Anglo-French Allied Forces. The soldiers looted as much as they could carry, including the twelve bronze animal heads of the Grand Waterworks fountain (some of which have been returned to China in recent years). Countless valuable artwork that was then stolen is now found in 47 museums around the world. After the palace was looted, thousands of soldiers took three days to completely destroy it and burn it to the ground. According to historical records, only 16 of the once more than 100 garden scenes as well as a few Chinese-style buildings survived the destruction. To make things even worse, the few buildings that survived the destruction of AD 1860 and those that had been restored or rebuilt in the years that followed were all completely destroyed in AD 1900 when the Eight-Nation Alliance invaded Beijing.

The ruins of the Old Summer Palace are now a part of the Yuanmingyuan Park which is located in the northern part of Haidian district in Beijing. In order to ensure the optimal preservation of the historic ruins, the area became a key cultural site under special protection of the district and municipal governments. It was first opened to the public on a trial basis in June 1988 as a historic park. A visit of Yuanmingyuan Park is made worthwhile by the natural beauty of its garden landscape and the historical significance of its ruins. More than a dozen replicas of historic buildings have been constructed in recent years and several temples have been refurbished and rebuilt. Together with the historic ruins and the reforested Chinese garden landscape, visitors can now gain a good impression of what once was one of the most formidable palaces ever built. There is also an exhibition hall in the park whose exhibits help you to visualize the former glory of the Old Summer Palace.

If you can't make it to Beijing at this time but want to learn more, you might want to check out this highly-informative website and search for documentaries about the history of Yuanmingyuan on YouTube and other video-hosting sites. How to get to Beijing's Old Summer Palace?

On the following Google map, you can see the location of Yuanmingyuan Park (the blue icon) and the Aman Summer Palace Beijing (the yellow hotel bed icon) which is our recommended hotel nearby. Further below on this page, you can read a review of this hotel's services and amenities. In case you are planning a trip to China, you could support this website by using the provided affiliate links to check prices and book your hotel accomodation!

The Aman Summer Palace Beijing that is reviewed below is one of the closest 5-star hotels to Beijing's Yuanmingyuan Park. In addition to the links to Agoda that are used in the review below, this hotel is also available for booking on Trip.com by following this link. 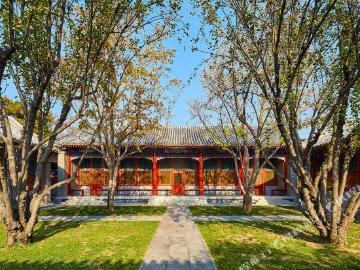 The Aman Summer Palace Beijing is a 5-star hotel that was opened in 2008 close to the East Gate of the new Summer Palace Yiheyuan. This serene luxury hotel consists of historic pavilions with tranquil internal courtyards that were built in the style of traditional Chinese architecture more than a century ago. During the late Qing dynasty, these pavilions were used by guests of the imperial court to await their audience with Empress Dowager Cixi. While being closer to the grounds of the new Summer Palace, the ruins of the Old Summer Palace inside Yuanmingyuan Park can be reached on foot from the Aman Summer Palace Beijing as well. The Beigongmen Station of the Beijing Subway lies just 720 meters away from the hotel, providing convenient access to the city's public transportation network. Reaching the Beijing Capital and Beijing Daxing International Airports by airport shuttle (which can be booked for an extra fee) from this hotel typically takes about 40 minutes for the former and 70 minutes for the latter. Beijing's multiple railway stations can also all be reached within an hour by taxi from this hotel.

All 51 rooms and suites of the Aman Summer Palace Beijing are air-conditioned and equipped with a flat screen TV, minibar and safe. Free breakfast is included and free bottled water is provided in the rooms. Free Wi-Fi is available as well. Smoking is however only permitted at certain designated smoking areas. Laundry service (including dry cleaning) and luggage storage are available. There are altogether five restaurants on-site that not only serve the best Chinese cuisine but also Japanese and Western cuisine. For exercise, guests have access to an indoor swimming pool, a fitness center, tennis and racquetball/squash courts as well as yoga and Pilates classes. For relaxation, guests can use the hotel's sauna, steamroom and spa.