The information contained here are subject to change. Chinese History Digest is not responsible or liable if any changes should occur. You could also check the official website of the Memorial Hall of the Victims in Nanjing Massacre by Japanese Invaders - www.nj1937.org - but it seems to be irregularly maintained.

The Nanjing Massacre Memorial Hall is located in the Jiangdongmen area of Nanjing (Jiangsu province) southwest of the city center. Officially named as the Memorial Hall of the Victims in Nanjing Massacre by Japanese Invaders, it is a museum that commemorates the atrocious events that occurred in Nanjing in December 1937 and January 1938. The city of Nanjing was the capital of the Republic of China at that time (since 1927). dead bodies of Chinese civilians that were massacred in Nanjing by Japanese soldiersThe Imperial Japanese Army attacked the city (that was written as Nanking by Westerners back then) in early December 1937 in the hope that its capture would lead to China's surrender. The most intense fighting during the Battle of Nanking (1st - 13th of December 1937) only lasted for two days after Japanese forces had launched an all-out attack on December 10th.

After gaining full control of the city by December 13th, Japanese soldiers began to massacre Chinese prisoners of war and the civilian population of Nanjing. More than 20,000 women were raped by the Japanese soldiers and many of them later killed. Countless commercial buildings and houses of the wealthy class were looted. About a third of all buildings in Nanjing were damaged by fire during this hellish period that lasted for about 6 to 8 weeks. Altogether, it is estimated that up to 300,000 civilians and unarmed Chinese soldiers were slaughtered by the Japanese army. (The population of Nanjing numbered around 600,000 people in 1927.) The killing was done indiscriminately and in such bestial ways as mass beheadings and burying people alive! street view outside the Memorial Hall of the Victims in Nanjing Massacre by Japanese InvadersThe Nanjing Massacre is also referred to as the "Rape of Nanking". It is still a contentious issue between China and Japan today. Just like there are some people who deny the holocaust, a minority of Japanese people deny that the Nanjing Massacre ever happened. The Nanjing Municipal Government built the Memorial Hall to the Victims of the Nanjing Massacre in 1985. It was enlarged and renovated in 1995. Its exhibits are to remind people of these historic events so that they will never be forgotten. While the museum bears witness to one of the worst atrocities in human history, it also tells of individual acts of heroism in trying to protect people from being slaughtered.

One such hero that is still revered by the Chinese people today was the German citizen John Rabe. His work in establishing and maintaining the Nanking Safety Zone protected the lives of about 200,000 Chinese people! His former residence at Xiaofenqiao No. 1 in Nanjing is now a museum dedicated to his memory and well-worth a visit! You can find more information about the John Rabe House on its official website. inside the exhibition hall for historical documents at the Nanjing Massacre Memorial HallA visit of the Nanjing Massacre Memorial Hall is made up of three parts: the outdoor exhibits, the remaining bones of the victims and the exhibition hall for historical documents. The outdoor exhibits are made up of statues, sculptures, tablets, relief carvings and a memorial walkway of survivors' footprints. The date '1937.12.13 - 1938.1' and number of victims is engraved on a large monument and the names of the victims are listed on a large wall.

The remaining bones of the victims are displayed in a coffin-shaped display hall. They were excavated in 1985 in the same area where the memorial hall now stands. A second excavation in 1998 uncovered 208 more bones. The mass burial pit in the Jiangdongmen area of Nanjing where the bones were unearthed is known as the "pit of ten thousand corpses".

The tomb-like exhibition hall for historical documents was built half underground. It contains more than 1000 items related to the massacre in illuminated display cabinets. Historical photographs and documentary films that can be watched on multimedia screens vividly bear witness to the atrocities that were committed by the Japanese soldiers that winter in Nanjing. There are also paintings and sculptures dispersed throughout the hall in which artists expressed their sentiments and visualized scenes of the Nanjing Massacre. How to get to the Nanjing Massacre Memorial Hall?

On the following Google map, you can see the location of the Memorial Hall of the Victims in Nanjing Massacre by Japanese Invaders (the blue icon) and the Hilton Nanjing (the yellow hotel bed icon) which is our recommended hotel nearby. Further below on this page, you can read a review of this hotel's services and amenities. In case you are planning a trip to China, you could support this website by using the provided affiliate links to check prices and book your hotel accomodation!

The Hilton Nanjing that is reviewed below is the closest 5-star hotel to the Nanjing Massacre Memorial Hall. In addition to the links to Agoda that are used in the review below, this 5-star hotel is also available for booking on Trip.com by following this link. 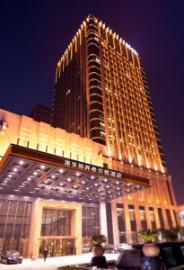 The Hilton Nanjing is a modern 5-star hotel that was opened in 2011 and most recently renovated in 2013. It is a part of the Wanda Plaza shopping complex only about a 10-minute walk from the Nanjing Massacre Memorial Hall and a 10-minute drive away from the city center. Access to the neighborhoods around the hotel is greatly facilitated by a free shuttle service. The Nanjing Olympic Sports Center is also just a short walk away from this hotel and the Nanjing International Expo Centre can be reached within 20 minutes by car. It takes mere minutes to walk to the nearest metro station (Jiqingmendajie Metro Station) but the Hilton Nanjing can of course also arrange taxis and rental cars (free parking is available). Reaching Nanjing Lukou International Airport typically takes about 45 minutes and free airport transfer can be requested by ticking the appropriate box when making the hotel booking online. China's high-speed railway network is accessible at the Nanjing South Railway Station which lies just a 20-minute drive from the hotel.

All rooms and suites of the Hilton Nanjing are air-conditioned and equipped with a refrigerator, minibar, safe and flat-screen satellite TV. Smoking is only permitted in certain designated areas of the hotel. Free bottled water is provided in the rooms and the daily fee for accessing the internet through Wi-Fi is 50 yuan. Laundry service (including dry cleaning) and luggage storage are available. Free breakfast (continental and buffet) is included in most room rates (159 yuan if not included) and the hotel's three restaurants serve local, Thai, Western and Chinese fusion cuisine. There is also a sports bar and a coffee house on the premises of the hotel. For exercise and games, guests have access to an indoor swimming pool, a modern fitness center and a billiard room. Relaxation options at the Hilton Nanjing include a spa, beauty salon and massages.