The information contained here are subject to change. Chinese History Digest is not responsible or liable if any changes should occur. If you can read Chinese, you could also check the official website of the Longmen Grottoes - www.lmsk.gov.cn - which however seems to be irregularly maintained.

The Longmen Grottoes (a.k.a. Longmen Caves) are located about 12km south of the city of Luoyang (Henan province). About 2300 caves and niches have been carved into the limestone cliffs along a 1km stretch on both sides of the Yi River there. The caves and niches contain Buddhist cave art of outstanding artistic quality (including about 110,000 Buddhist stone statues) from the time of the Six dynasties and the Tang dynasty. It is therefore well-deserved that the Longmen Grottoes are a UNESCO World Heritage site. Among the currently 53 historic sights in China that are on that list, there are only two other Buddhist cave complexes. These are the Mogao Caves near Dunhuang and the Yungang Caves near Datong. All three Buddhist cave complexes should ideally be on the itinerary of travellers that are interested in Chinese history. The most important grottoes of the complex are all located along the western bank of the Yi River. These include the Fengxian Temple, Wanfo Cave (Ten-Thousand-Buddha Cave), Guyang Cave (Old Sun Cave), Binyang Cave and Lotus Cave (Lianhua Cave). Along the eastern bank of the river exist a few smaller grottoes as well as the Xiangshan Temple and the Bai Garden. There are two bridges to cross from the western to the eastern side of the cave complex and vice versa. Xiangshan Temple is the most important (and one of the oldest) of the ten Buddhist temples at the site of the Longmen Caves. Some of its structures still date from the time of its reconstruction during the Qing dynasty. The Bai Garden is a landscape garden that was built in 1985 around the tomb of the Tang dynasty poet Bai Juyi. in front of the Fengxian Temple Cave, the largest of the Longmen CavesOf all the grottoes at Longmen, the Fengxian Temple is by far the largest. Its nine carved figures can be clearly seen even from the other side of the river. Among them, the 57-feet tall (17.14m) Vairocana Buddha at the center is the tallest of all the figures at the Longmen Grottoes. The Wanfo Cave is famous for the 15,000 small Buddha statues that are chiseled into its northern and southern walls. It also contains lifelike reliefs of singers and dancers. Both the Fengxian Temple and the Wanfo Cave were built during the Tang dynasty.

The Guyang Cave, Binyang Cave and Lotus Cave were all built during the period of the Northern Wei. The Guyang Cave is in fact the oldest cave at the Longmen Caves. It contains hundreds of statues and many famous calligraphic inscriptions. The very large Buddhist sculptures that are found in the North, Middle and South Binyang Cave are all characteristic of the Northern Wei style. The Lotus Cave got its name from the amazing high relief carving on its ceiling. It depicts a highly detailed lotus flower of huge size that is surrounded by six flying musicians.

There are many more caves to be visited in addition to the ones mentioned on this page. The Longmen Grottoes are a truly great place to visit to not only learn about the development of Buddhism in China but also about various cultural aspects such as the music, calligraphy, clothing, medicine etc. of these historic times.

How to get to the Longmen Grottoes near Luoyang?

On the following Google map, you can see the location of the Longmen Grottoes (the blue icon) and the Luoyang Ease House (the yellow hotel bed icon) which is our recommended hotel nearby. Further below on this page, you can read a review of this hotel's services and amenities. In case you are planning a trip to China, you could support this website by using the provided affiliate links to check prices and book your hotel accomodation!

The 4-star Luoyang Ease House that is reviewed below is located near Luoyang's city center. Convenient transportation to the airport and the high-speed Longmen Railway Station is available from its location. It is also just a short taxi ride away from the Longmen Caves. In addition to the links to Agoda that are used in the review below, this hotel is also available for booking on Trip.com by following this link. 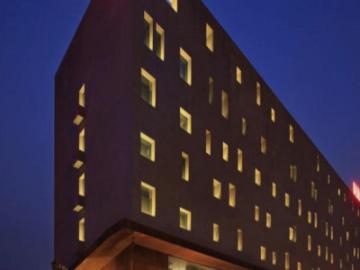 The Luoyang Ease House is a 4-star business hotel in a quiet and clean residential area. It was built by an international design team in a style that mixes modern and traditional architectural design elements. Its location is ideal for travellers that come to Luoyang by high-speed train as the Luoyang Longmen Railway Station is just a short drive away. The hotel provides free shuttle service to/from this high-speed railway station upon request. Tourists that fly in to the Luoyang Beijiao Airport also have nothing to worry about since the hotel can provide free airport pickup upon request as well. Self-catering is a convenient and cheap option for guests of the Luoyang Ease House since it has a convenience store and is also very close to the Quanshun shopping center. Luoyang's city center is a mere 1 km away and the Longmen Grottoes are just a few miles south.

The heated and air-conditioned rooms of the Luoyang Ease House are highly rated for their cleanliness and comfort. Besides the standard rooms, there are VIP rooms, family rooms as well as suites available and non-smoking rooms can be requested. All rooms are equipped with a flat-screen TV, air purifier, writing table and mini-bar and free breakfast is included. Free Wi-Fi is available in all the rooms and the public areas. Laundry service (including dry cleaning) and luggage storage are available as well. Guests can satisfy their culinary needs and desires at the hotel's restaurant, bar and coffee shop. An unusual and highly original feature of this hotel is that it has a library with nearly 10,000 books and magazines and a reading area on each floor.