2 yuan
fee for exhibitions in the park not included

Jingshan Park is located on the artificially-created Jingshan Hill (Prospect Hill) right in the center of Beijing. It is a former imperial garden that has been open to the public since 1928. After major rebuilding and renovation, it became an official park in 1949. One of the park's main draws are the splendid views it offers from its five peaks of the surrounding city. The hill's central peak is in fact the highest-elevated point in the city center of Beijing. From here, visitors will enjoy the best view of the Forbidden City to the south. In Chinese history, Jingshan Hill has also found fame for a morbid event that happened there during the last days of the Ming dynasty. In the spring of AD 1644 when Beijing was invaded by a rebel army under the leadership of Li Zicheng, the Chongzhen Emperor hanged himself from one of the trees on this hill that was then still known as Meishan Hill (Coal Hill). pavilion at one of the peaks of Jingshan HillThe existence of a park at this spot can be traced back all the way to AD 1179. The initial hillshape was formed during the time of the Yuan dynasty. When the Mongol rulers of this period had their capital Dadu built, the mud that was dredged up from the city's moat and surrounding lakes was used to pile up the hill. It was then known as Green Hill but it was known by many other names at various points in history such as Wansui Hill (Long Live Hill), Zhen Hill, Feng Shui Hill and the Garden of a Hundred Fruits (Baiguoyuan). The hill was enlarged to its present size during the Ming dynasty when the moats and canals that surround the Forbidden City were dredged.

From the time of the Yuan dynasty to the Qing dynasty, Jingshan Park served as an imperial garden. The emperor and his family went there to have a picnic and to climb the hill's peaks and admire the scenery from there. Various fruit trees and many varieties of flowers are planted throughout the park. Every year in May, more than 20,000 peonies will color the park in many different hues. There is no other garden in Beijing that comes close to rivaling Jingshan Park as the biggest peony rose garden of the capital. In addition to the park's natural splendor, there are charming pavilions and palatial halls that perfectly blend with its scenery. Qiwang Pavilion (front) and Wanchun Pavilion (behind on the peak) at the Jingshan Park in BeijingThe first pavilion you will see when entering the park is the two-storied Qiwang Pavilion with its golden-glazed roof. It was there that the emperors used to worship memorial tablets of the great sage Confucius. There are also stately scenery viewing pavilions on each of the hill's five peaks. They were constructed in AD 1751 during the era of the Qianlong Emperor. The pavilion on the central peak is the Wanchun Pavilion (Ten Thousand Spring Pavilion). From here, visitors have the best view of the surrounding city including a full overview of the Forbidden City to the south. The two pavilions on the eastern peaks are the Pavilion of Admiring the Surroundings and the Pavilion of Gazing at Excellence. The Pavilion of Rich View and the Pavilion of Accumulated Fragrance are located on the peaks on the western side.

Originally, a copper Buddha statue stood in each of the five pavilions at the peaks. Each statue represented one of the five tastes: sour, bitter, sweet, umami and salty. The five buddha statues were known as the "Five Flavored Immortals". Unfortunately, four of the statues were looted and one was badly damaged when the Eight-Nation Alliance occupied Beijing in 1900 at the start of the 20th century. The replacement statues that you will see in the pavilions now were made in 1999.

You will also find palatial halls on Jingshan Hill that were originally used for ancestor worship. During the Qing dynasty, the emperor visited Shouhuang Hall (Hall of Imperial Longevity) each season to pay respects to the portraits of his ancestors there. These days, you won't find portraits of the former emperors at Shouhuang Hall anymore though, since the hall was turned into the Beijing Children's Palace in the 1950s. The other palatial halls in Jingshan Park - the Guande Hall (Hall for Observing Morals) and the Yongsi Hall (Missing Hall) - were originally used during the Qing dynasty to let the dead bodies of recently deceased emperors and empresses lie in state there. view of the Forbidden City from the top of Jingshan Hill

How to get to the Jingshan Park in Beijing?

On the following Google map, you can see the location of Jingshan Park (the blue icon) and the Jingshan Garden Hotel (the yellow hotel bed icon) which is our recommended hotel nearby. Further below on this page, you can read a review of this hotel's services and amenities. In case you are planning a trip to China, you could support this website by using the provided affiliate links to check prices and book your hotel accomodation!

The Jingshan Garden Hotel that is reviewed below is located inside a traditional hutong just a short walk away from Beijing's Jingshan Hill. In addition to the links to Agoda that are used in the review below, this 4-star hotel is also available for booking on Trip.com by following this link. 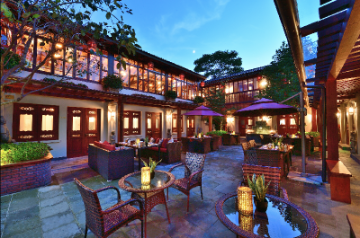 The Jingshan Garden Hotel is a quaint 4-star courtyard hotel that is located inside Beijing's traditional Sanyanijing Hutong. The hotel was opened at this tranquil location in 2011 and most recently renovated in 2018. Previously known as the Red Wall Jingshan Garden Hotel, it is just 400 meters away from Jingshan Park and many other places of interest such as the Forbidden City (1.3 km away), Beihai Park and the National Art Museum of China can all be reached on foot from this uniquely-styled hotel. Two of Beijing's famous shopping and food streets - Wangfujing Street (1.6 km) and Nanluoguxiang - lie within easy walking distance from this hotel as well. Access to the neighborhoods around the hotel is greatly facilitated through a convenient shuttle service, so it is not even necessary to walk everywhere. To visit other places in Beijing that are farther away, guests could use public transportation (only 600 meters to nearest subway station) or rent a car (street parking is available) or book a taxi at the hotel. Of course, the hotel also arranges airport transfer (for an extra fee of 300 yuan) and travel time to the closest airport - Beijing Capital International Airport (PEK) - is typically about 60 minutes.

All 16 rooms of the Jingshan Garden Hotel provide both air-conditioning and heating and are equipped with a flatscreen TV, refrigerator, minibar and safe. Smoking is only allowed in certain designated areas. Free Wi-Fi access is provided in all rooms and breakfast (American, Asian, Buffet, Continental) is generally included in the room rate as well (78 yuan if not included) and can even be served inside the room. Laundry service (including dry cleaning) and luggage storage are available. The Jingshan Garden Hotel features an on-site restaurant and a bar and provides complimentary bottled water, tea and instant coffee inside the rooms. An unusual feature of this hotel is that it has a library but guests can also read and relax at the hotel's garden.